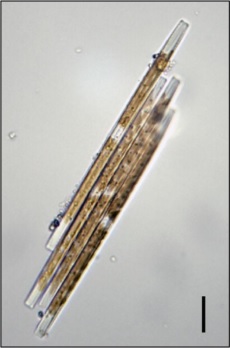 Genus is characterized by the presence of a canal raphe. Number of fibulae and striae, and the quotient between them are important characters at species level. Genus Bacillaria does not belong to plankton primarily; B. paxillifera, however, is often found in samples from shallow areas (Throndsen et al, 2007).

Sites of occurrence in RSA:
In Winter 2006 Cruise, this species occurred, usually in small numbers, however, it was quite abundant at some localities (refer sites map); maximum abundance (1.2*10^3 cells/l) was associated with Kuwaiti waters in the northwestern part of the inner RSA (St. 1). Species have been previously reported (as Bacillaria paradoxa) from the inner RSA (Simonsen,1974) and from Kuwaiti waters (Al-Yamani et al., 2004; Al-Kandari et al., 2009). 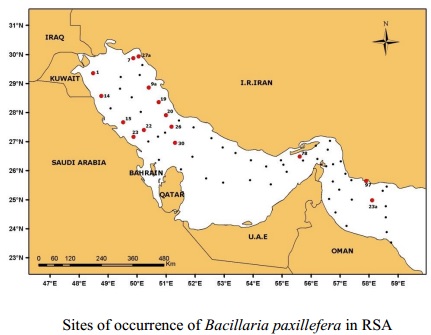