Description:
Valves lanceolate, slightly sigmoid near the ends, with flat valves and very acute, protracted ends, about 300-600 µm long, 40-75 µm wide. Raphe straight, before the ends sigmoid, central in the middle, eccentric toward the ends, central pores very approximate. Axial area very narrow, central area absent.Oblique striae about 30 in 10 µm, crossing each other at an angle of about 60º. Transapical striae always perpendicular to the raphe, about 28-30 in 10 µm in the middle, somewhat wider (ca. 27) near the ends; the striation is hardly visible (Simonsen, 1974).

Sites of occurrence in RSA:
In Winter 2006 Cruise, it was present in small numbers at scattered stations (refer sites map). Species has been previously reported from the Indian Ocean and the inner RSA (Simonsen, 1974). 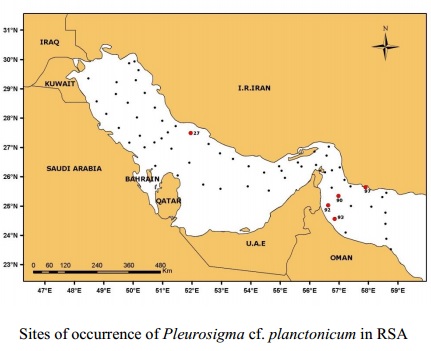