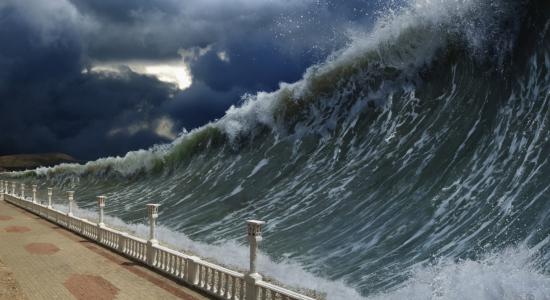 The Indian Ocean tsunami of Dec. 26, 2004, was one of the worst natural disasters in history, killing 243,000 people in South Asia and East Africa with little to no warning. Ten years later, expanded networks of seismic monitors and ocean buoys are on the alert for the next killer wave.

Even today's expanded monitoring network can't issue an alert that quickly, "so we have to prepare the public to interpret the signs and survive," Angove said.

End of the World: Memories of Tsunami Are Still Fresh

When a tsunami wave rises, the alert comes from a $450 million warning network that was put in place after 2004's catastrophe. The Indian Ocean Tsunami Warning System includes more than 140 seismometers, about 100 sea-level gauges and several buoys that detect tsunamis.

The global network of Deep-Ocean Assessment and Reporting of Tsunami buoys, which detects passing tsunami waves, has also expanded, from six DART buoys in 2004 to 60 buoys in 2014, Angove said.

Getting the warnings to people living in remote coastal areas is one of the biggest hurdles for the new system. Another hurdle has to do with forecasting the effect of reflected tsunami waves. The 2004 Indian Ocean tsunami ricocheted off island chains, and some of the worst flooding arrived unexpectedly late in places like Sri Lanka and Western Australia.
After an earthquake, scientists at NOAA's tsunami warning centers spend about an hour working out the details of a tsunami forecast, said Vasily Titov, director of NOAA's Center for Tsunami Research. The results project when the wave will arrive at shorelines and harbors, estimate tsunami-induced currents and gauge the height of the waves.

The agency's goal is to dramatically reduce that hour of lag time. "We're now at the point where we want to do it in five minutes," Titov said. That means building out the seismic network, getting a faster response from sea-level sensors and speeding up the computer forecasts.

"When these three components come together, then we can save everybody," Titov said.