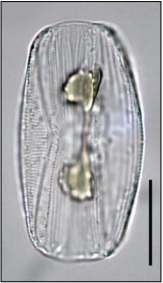 Cells solitary, generally free-floating, or in tough mucous film adhering to a substratum. A girdle view shows elliptical with truncated flattened ends. Frustules asymmetric, shaped like a third of an orange. Valves not parallel with each other, but with surfaces in planes at an angle one with another. Valves curved or sublunate, and in the complete frustule, the ventral margins lie parallel and close to each other, with the raphes of the two valves in the same focal plane, while the dorsal margins are separated by a very deep development of the girdle. Raphe usually eccentric, lying closer to the ventral margin; valve surface striate, usually punctate; ventral side narrower, and often without structure or with less structure than on the arcuate dorsal side; girdle usually complex, composed of numerous bands that may or may not bear puncta. Chromatophores: very variable, and may be from one to four irregularly shaped plates, or as numerous granules (Hendey, 1964).

Sites of occurrence in RSA:
In Winter 2006 Cruise, it was present in small numbers at three stations (refer sites map). 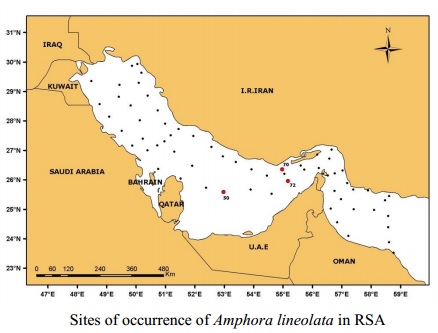