Description:
Valves broadly lanceolate, with a slight sigmoid flexure toward the apices; apices acute; polar nodules very small. Raphe is moderately sigmoid, more so than the valve margin; valve surface striate, striae transverse, 18-20 in 10 µm, and oblique 16-18 in 10 µm. The oblique striae are more distant near the center than at the ends, but the terminal striae are at a more acute angle. Length of valve 80-100 µm, breadth 15-20 µm (Hendey, 1964).

Sites of occurrence in RSA:
In Winter 2006 Cruise, this species was commonly observed at various sites (refer sites map),often in large numbers; maximum abundance (3.3*10^3 cells/l) was associated with the northwestern part of the inner RSA off Saudi Arabia (St. 23). It has been previously reported from the inner RSA (Simonsen, 1974). 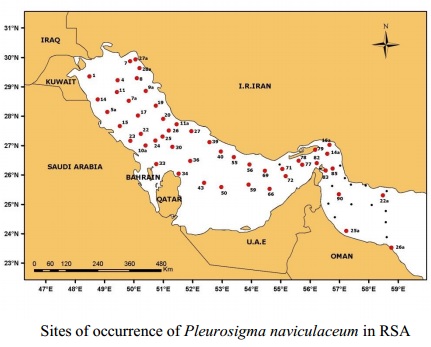