Description:
Valves elliptic-lanceolate, with rounded apices; axial area straight, wider at the middle distance, constricted near the central nodule. Valve surface furnished with striae that are interrupted by the lateral extensions of the central area. These lateral extensions are not truly lyrate, and converge to terminate well before the apices of the valve are reached. Striae punctate, slightly radiate. Length of valve 38-60 µm, breadth 16-28 µm (Hendey, 1964).

Distribution:
Common in littoral zone and widely distributed species; it occasionally is reported in plankton.

Sites of occurrence in RSA:
In Winter 2006 Cruise, it was present in very small numbers at three stations (Stations 33, 34,and 43) in the central part of the inner RSA (refer sites map). Species has been previously reported (as Navicula abrupta) from the Indian Ocean (Simonsen, 1974) and from Kuwaiti shore (Hendey, 1970) and waters (Al-Kandari et al., 2009 – as Lyrella cf. abrupta). 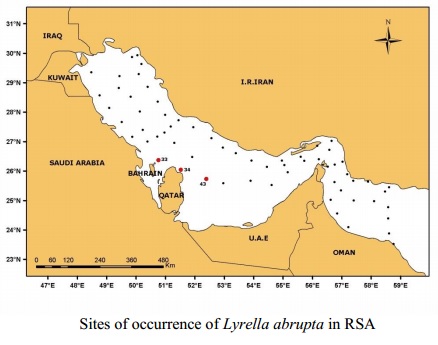