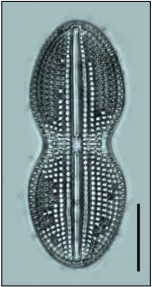 Cells solitary, free; valves elliptical or linear-elliptic, with or without a median constriction;apices rounded or broadly cuneate. Central nodule is prominent, often large, quadrate and strongly formed; central area small, reduced, and produced to form longitudinal extensions usually described as horns, which lie upon either side of the raphe, and enclose it as solid ribs. Beyond the horns are thinner, usually narrow, depressed areas, usually referred to as the furrows. These may be hyaline and structureless, or may contain a row of large puncta, or may be crossed by faintly transverse costae. Beyond the furrows on each side of the raphe there is, in some species, a more or less lunate area in each segment (that is, above and below the transapical axis) which is usually referred to as the lunula. This may be crossed by costae or alveoli which may or may not bear a single or double row of puncta. These are frequently more strongly developed, close to the valve margin. In some species, transverse costae may be absent. Chromatophores: usually two deeply crenulate bodies that lie along the girdle (Hendey, 1964).

Description:
Valves panduriform, slightly constricted in the middle, dividing the valve surface into two tongue-shaped segments. The central nodule is subquadrate or sometimes almost circular, and produced to form two horns, one on either side of the raphe or median line. Valve surface costate, transverse in the middle, but in slightly curving, radiating lines toward the apices and crossed by numerous undulating longitudinal lines; length of valve 50-90 µm; breadth 17-36 µm (Hendey, 1964).

Distribution:
Mainly, littoral species, but is frequently found in the plankton.

Sites of occurrence in RSA:
In Winter 2006 Cruise, this species was commonly observed at 3 stations (refer sites map),often in large numbers and also occurred at few stations in Transects 3 and 8; maximum abundance (5 103 cells/l) was associated with the northwestern part of the inner RSA off Saudi Arabia (St. 23). 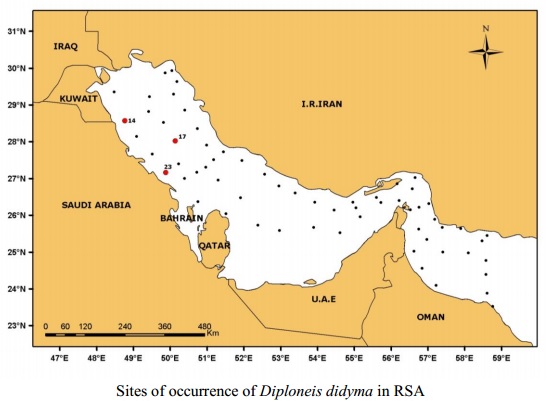