The genus Trichodesmium comprises about 10 species, which have their main distribution in warm temperate and tropical waters (Cronberg and Annadotter, 2006). 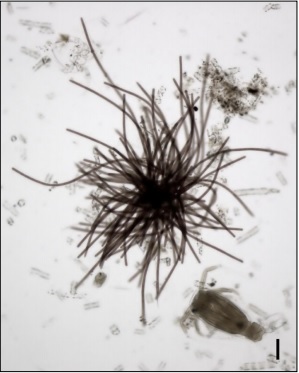 Harmful Effect:
Trichodesmium is a marine cyanophyte and appears in blooms. To date, two species have been reported to be toxigenic, T. erythraeum and T. thiebautii. Strains can produce neurotoxins and hepetotoxins (Hansen et al., 2001; Cronberg and Annadotter, 2006). Trichodesmium blooms have been reported in the past in the RSA, e.g., off Kuwait (Al-Yamani et al., 2004) and the UAE.

Sites of occurrence in RSA:
In Winter 2006 Cruise, Trichodesmium sp. was frequently found at various sites (refer sites map) the RSA samples, but never reached high abundance. The abundance was low compared to that of the other main taxonomical groups of phytoplankton, such as diatoms and dinoflagellates. Maximum contribution of Trichodesmium sp. to the total phytoplankton abundance did not exceed 2%; the highest concentration reached 1.1 10 cells/l. The maximum abundances (> 10 cells/l) were encountered in the southern part of the inner RSA.

A bloom of species from the genus Trichodesmium (T. erythraeum) has been previously reported from Kuwaiti waters of the inner RSA (Al-Yamani et al., 2004).