Phaeocystis is a genus of foam-producing species distributed worldwide and causing problems for fishing and tourism in reas as widely scattered as New Zealand (Tasman Bayslime) and the North Sea (Davidson and Marchant, 1992). Recent evidence from Norway has shown that in addition to the problems caused by the foam, Phaeocystis may also form toxin(s) responsible for fish kills. Phaeocystis is a genus of colony-forming species, and the morphology of the individual colonies is highly variable. Several species of Phaeocystis were described mainly around the turn of the century but these 'old' species were all merged into one by Kornmann (1955) and Kashkin (1963), followed by Sournia (1988). This trend has now been reversed, and several authors have suggested that the genus comprises several species for which some of the old names are being applied (e.g., Baumann et al., 1994).

Morphology:
At least two different stages occur in the life cycle, a colony-forming and a single-celled stage. Colonies may attain a length of up to 2 cm, and thus, become visible to the naked eye.
The cells are embedded in mucilage, forming a monolayer along the periphery of the colony.Each cell contains 2 (1-4) arietal yellow-green chloroplasts, but lack flagella and haptonema. The unicellular stage is biflagellate, 3-8 μm long, with a very short haptonema which is often very difficult to see with the light microscope. The cells usually contain two chloroplasts. The cell surface is covered with submicroscopic flat scales of two kinds. In some cases, trichocyst-like structures have been found, appearing as pentagonal or nonagonal stars after discharge from the cell (Parke et al., 1971). The life history of Phaeocystis is still unresolved, and both the colonies and the single cells may self replicate, the colonies by fragmentation. It appears likely that some colonies originate from single cells which resorb the appendages and divide into colonies. Single or few-celled stages attached to the setae of diatoms may represent flagellates that have settled. They may eventually give rise to the freefloating colonies, which can contain thousands of cells.

Taxonomy:
The taxonomy of Phaeocystis is still unresolved, but Medlin et al. (1994), based on the morphology of the colonies, geographic distribution, growth in relation to temperature and 18s small subunit ribosomal RNA sequencing recognized three species, in addition to P. scrobiculata, which is known only from the flagellated stage and differs markedly from the others.

Harmful Effect:
The main effects of Phaeocystis is clogging of fishing nets, and formation of masses of foam, which may reach several meters in thickness (Lancelot et al., 1987). The foam appears when blooms are washed ashore. Like many other marine plankton algae, Phaeocystis blooms produce dimethylsulphide (DMS), which is believed to evaporate to the atmosphere and contribute to the acidity of rainwater (Davidson and Marchant, 1992). A direct toxic effect of Phaeocystis pouchetii is believed to have occurred in Norway in 1992, causing death of farmed salmon valued at NKr 1 million. The toxic compound(s) has not been identified (Hallegraeff et al., 1995; IOC list, 2002).

Description:
Colony-forming cells are embedded in mucilage, forming a monolayer along the periphery of the colony. Each cell contains 2 chloroplasts.

Sites of occurrence in RSA:
The occurrence of the colonial stage of Phaeocystis globosa was found as fragments of colonies. In Winter 2006 Cruise, relatively higher occurrences were observed in the waters of the Sea of Oman (refer sites map). Earlier studies in the waters f Kuwait (Al-Yamani et al., 2004) indicated blooms of the aforementioned species (with large colonies) during winter and early spring. 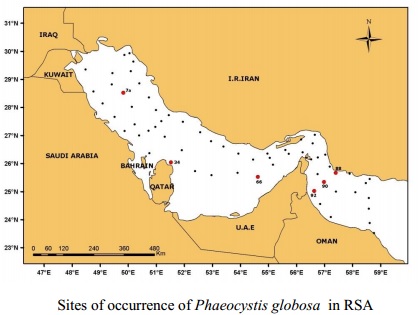