Description:
Cells cylindrical, 12-18 µm in diameter, up to 575 µm in length. Cells single or united in chains. Valves oblique, pointed, the apical process, hollow most of the way up, with small wings at the base, regularly decreasing in size until the point is reached. Small wings run up about a third of the spine; do not extend to valve itself. Intercalary bands numerous, scale-like in two long rows, each band, a triangular scale with the corner pointing so that they form an imbricating row on each side of the apex. Intercalary bands with ribs running from the middle line fan-like toward the sides, on an average, 17-18 in 10 µm, between the ribs coarsely lined with 24 cross lines in 10 µm. Girdle bands and valves much more delicate. Girdle bands with 19-22 pervalvar rows of lines and 25-28 puncta in 10 µm, lines on the valves from the base toward the excentric point 20-22 in 10 µm, with 26-30 puncta in 10 µm. Chromatophores numerous, small, lying near the cell wall. Nucleus near wall (Cupp, 1943).

Sites of occurrence in RSA:
In Winter 2006 Cruise, it was one of the commonest species in the RSA samples,encountered in 68.1% of the samples. This species was observed often in large numbers at various sites (refer sites map); maximum abundance (6.4*10^4cells/l) was associated with the northwestern part of the inner RSA (St. 7). It has been previously reported from Kuwaiti waters of the inner RSA (Al-Yamani et al., 2004; Al-Kandari et al., 2009). 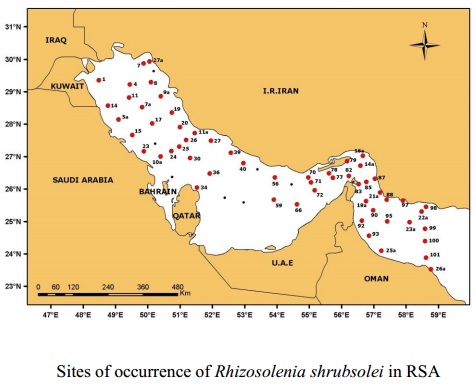