Cells cylindrical with greatly elongated pervalvar axis, living singly or in compact or loose chains. Cells usually straight or more rarely curved, forming spirally twisted chains. Cross section elliptical or circular. Intercalary bands usually very numerous, but in some species, difficult to see. Only a few species with ring-shaped intercalary bands; in most species, they are rhombic, trapezium-like, or scale-shaped. Their separation lines are called imbrication lines. The valves called calyptrae in the genus Rhizosolenia, are in some species almost flat or symmetrically cone-shaped, usually, however, eccentric sharp cone-shaped or hoodshaped. Likewise, the valves have a usually eccentric process, short or bristle-like elongated, blunt or sharp, solid or hollow. In a few species, the process is completely absent, and only the valve is more strongly drawn out and thinner to resemble a process. The cells are thin - walled throughout and usually collapse when dried. The membrane structure frequently difficult to see, consists of puncta or little dots arranged in quincunx or definitely arranged lines. The chromatophores are usually small, numerous, distributed on the entire cell wall, but especially massed in the girdle zone about the nucleus. In some species, larger plate-like chromatophores are present. Dimorphic forms occur. These are often classed as separate species. Auxospores, resting spores, and microspores are known. Auxospores are either at right angles to the mother cell or longitudinal. The resting spores occur singly or in pairs within the mother cell. They are thick-walled and cylindrical, with one valve rounded; the other sharply conical (Cupp, 1943).

Description:
Cells with cylindrical central region, elongated cone-shaped valves. Diameter 22-70 µm; length up to 530 µm. Intercalary bands scalelike, usually in four or five rows, with regular bow-shaped margins. Imbrication lines distinct. Apical process short, straight, centrally located, traversed by a canal in center, cut off abruptly at end. Canal enlarged at base, bell-shaped at apex. Walls of valve moderately robust, with rows of punctuations beginning somewhat below the process and diverging toward the base of the calyptra, 17-18 puncta in 10 µm near apex, 20-22 near base of valve. The membrane of the intercalary bands more delicate, with puncta in three crossing systems, 22-24 puncta in 10 µm. Chromatophores numerous, small. Auxospores formed at right angles to long (pervalvar) axis of cell. Diameter of cell with auxospore 22 µm, of auxospore 46 µm (Cupp, 1943).

Sites of occurrence in RSA:
In Winter 2006 Cruise, this species occurred occasionally at various sites (refer sites map),usually in small numbers; maximum abundance (1.1*10^2cells/l) was associated with the northwestern part of the inner RSA (St. 11). species have been previously reported from the inner RSA (Simonsen, 1974) and from Kuwaiti waters (Al-Yamani et al., 2004; Al-Kandari et al., 2009). 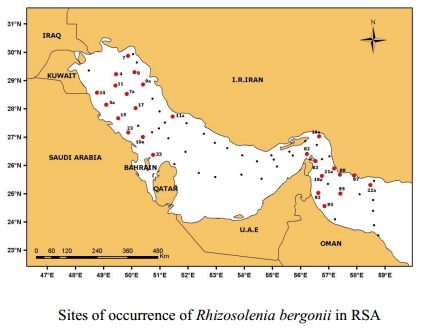