The generic type, Proboscia alata, was first described as Rhizosolenia alata with a series of forms, all with valve extended into a shorter or longer tube with truncate tip (proboscis), and no internal processes. Chain formation by the proboscis of neighboring cells fitting into the claspers on the adjacent valve. Auxospores, formed terminally. The different forms are now regarded as separate species (Throndsen et al., 2007).

Distribution:
Oceanic, but often near the coast, temperate species.

Sites of occurrence in RSA:
In Winter 2006 Cruise, this species was frequently observed, often in large numbers at various sites (refer sites map); maximum abundance (5.6*10^3cells/l) was associated with the Sea of Oman (St. 25a). It has been previously reported (as Rhizosolenia alata) from the inner RSA (Simonsen, 1974) and from Kuwaiti waters of the inner RSA (Al-Yamani et al., 2004; AlKandari et al., 2009). 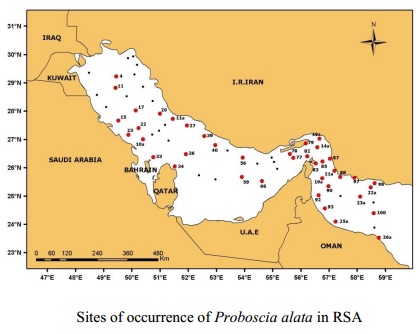