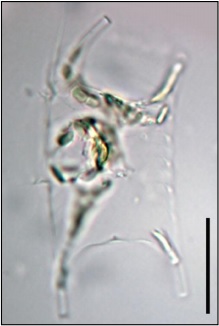 Description:
Similar to E. zoodiacus in character of chain and general appearance. Differentiated by much more prominent intercalary bands, and longer, thinner processes, so that the apertures are wider. Sculpturing on valves, similar but not identical, in more definite rows from center to ends of processes, 18-20 puncta in 10 µm. Surface of intercalary bands, similarly punctated, very fine puncta in rows, running in direction of pervalvar axis. Length of apical axis 29-36 µm (Cupp, 1943).

Sites of occurrence in RSA:
In Winter 2006 Cruise, this species was frequently observed at various sites (refer sites map),often in large numbers; maximum abundance (8.1*10^3cells/l) was associated with the Iranian coast in the Sea of Oman (St. 88). it has been previously reported from the inner RSA (Simonsen, 1974). 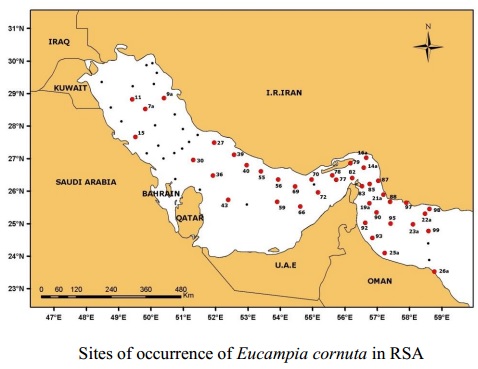