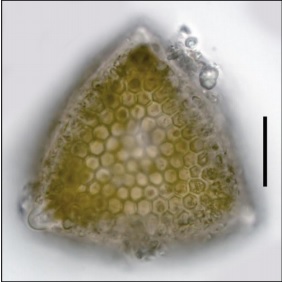 The sides of the cell are usually straight or sometimes very slightly convex. The angles are furnished with stout cornutate processes. The valve surface is covered with a regular hexagonal loculation. The loculi are usually open upon the outer surface, while the lower wall or floor is furnished with poroids. The valve mantle is narrow. The girdle is always simple and finely punctate. Small spines are usually present on the valve surface at the point of confluence of the walls of the loculi, and are often developed at the margin of the valve where they have the appearance of a palisade (Hendey, 1964).

Description:
The strongly siliceous triangular valves have convex sides and a convex valve surface. The angles of the valve are furnished with stout processes. Valve surface strongly areolate, areolae hexagonal, entire over the whole surface. Length of side 80-120 µm (Hendey, 1970).

Sites of occurrence in RSA:
In Winter 2006 Cruise, this species was present in small numbers at three stations (refer sites map). It has been previously reported from the Indian Ocean (Simonsen, 1974) and from Kuwaiti shore (Hendey, 1970). 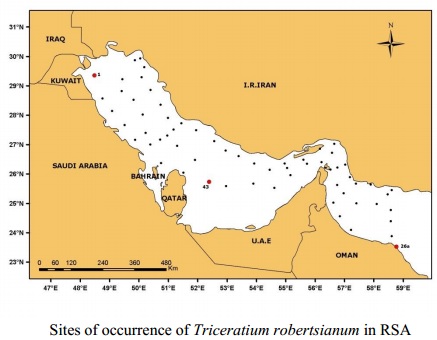