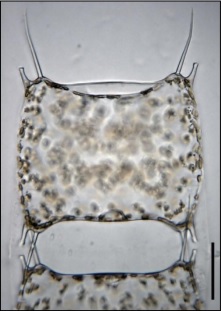 Description:
Cells solitary or united by their spines to form loosely connected colonies. In girdle view, the frustule is shaped not unlike a pillow, being about 2-2.5 times as long as it is broad. Weakly siliceous. Valves elliptical, having apices furnished with short processes; valve surface slightly concave, bearing two spines which originate close to the base of the processes. Spines long, equal to or a little longer than the apical length of the valve (i.e., the width of the frustule when lying in girdle view). Chromatophores: numerous small irregular bodies scattered throughout the cell. Apical axis of valve 120-260 µm; transapical axis of valve 60-80 µm; length of cell up to 300 µm (Hendey, 1964). 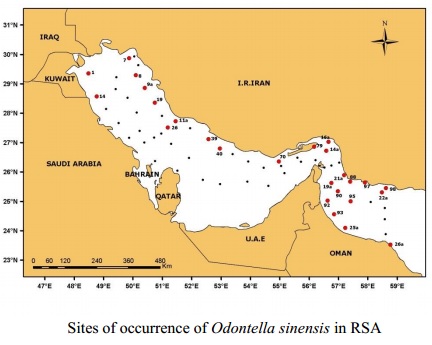