Cells with shorter or longer horns, each with a top plate perforated by closely packed holes (ocellus) through which mucus is extruded. Straight chains (cells united by both horns) or zigzag chains (cells united by one horn) are observed. Valves elliptical or lanceolate. Two labiate processes per valve, usually with long external tubes are present. Many small chloroplasts (Throndsen et al., 2007).

Sites of occurrence in RSA:
In Winter 2006 Cruise, the genus Odontella combines with three species. Species of this genus were occasionally observed in the RSA phytoplankton, but in low concentration (not more than 4.9*10^2 cells/l; 1% of total phytoplankton abundance). Relatively higher abundance of Odontella spp. (> 102 cells/l) was mostly associated with the waters of the Sea of Oman.

Description:
Cells united in straight or zigzag chains. Valves ellipticallanceolate, with obtuse processes inflated at the base. Center
part of valve convex, more or less flattened at the top from which usually more or less long spines project. Spines sometimes absent or several. Girdle zone is sharply differentiated from the valve zone by a clear depression. Cell wall strongly siliceous, areolated-punctated. Areolae 8-10 in 10 μm, on the valve in radial rows. On the girdle band in pervalvar rows, 7-10 rows in 10 μm, with 8-14 puncta or areolae in 10 μm; a very variable species. Length of apical axis 12-97 μm; with a number of small spines on valves in warmer-water specimen (Cupp, 1943).

Sites of occurrence in RSA:
In Winter 2006 Cruise, this species occurred at two sites (refer sites map) in small numbers. It has been previously reported from the Indian Ocean (Simonsen, 1974) and from Kuwaiti shore (Hendey, 1970) and coastal waters (Al-Kandari et al., 2009). 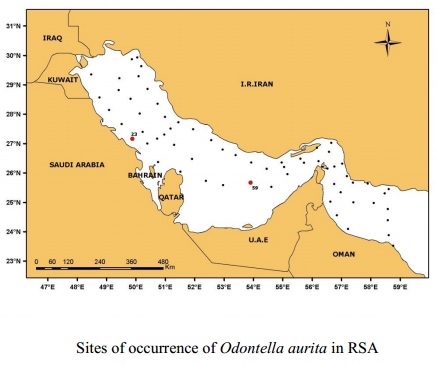