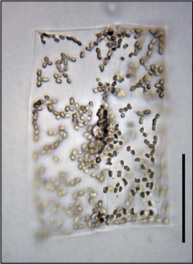 Description:
Cells in chains, united by valves which have a slight central depression; tripartite in valve view, twisted on pervalvar axis. Dimensions: 200 50 20 µm (Crosby and Wood, 1958).

Distribution:
Typical species in tropical areas of the Indian Ocean (Allen and Cupp, 1935). It has been reported also from Australia and New Zealand (Crosby and Wood, 1958).

Sites of occurrence in RSA:
In Winter 2006 Cruise, this species occurred at few scattered sites (refer sites map), usually in small numbers; however, it was quite abundant at some localities; maximum abundance (1.9*10^3 cells/l) was recorded in the Sea of Oman (St. 98). 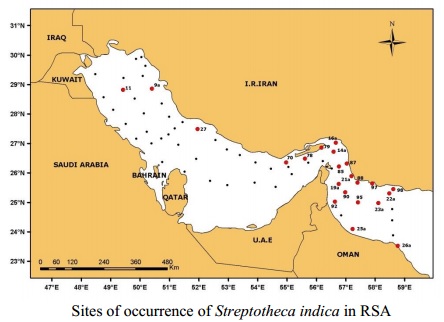