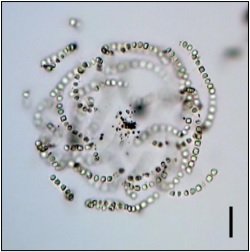 Description:
Chains short, curved, many united in large, slimy,circular colonies, held together by slime, or mucilaginouslike substance, and often by some very fine long setae which are felted together. Cells 6-12 µm wide, in broad girdle view four-cornered, corners not touching those of adjacent cells. Apertures rather long, slightly narrower in the center. Setae hairlike, arising from corners of the cell, short basal part. Three setae of two adjacent valves are short, fourth, very long and entwined with long setae of adjacent cells to hold the chains in colonies. Long setae not always present. One chromatophore on girdle side. Resting spores central or near central, smooth on both valves (Cupp, 1943).

Harmful Effect:
Non-toxic bloom-forming species. Harmful effect could just as well be caused by its presence in mucilage colonies as by the setae (Hallegraeff et al., 1995).

Sites of occurrence in RSA:
In Winter 2006 Cruise, this species occurred at few sites (refer sites map), usually in small numbers; however, it was very abundant at some localities; maximum abundance (5.7*10^5 cells/l) was associated with the southern part of the inner RSA (St. 78). It has been previously reported from Kuwaiti waters of the inner RSA (Al-Kandari et al., 2009). 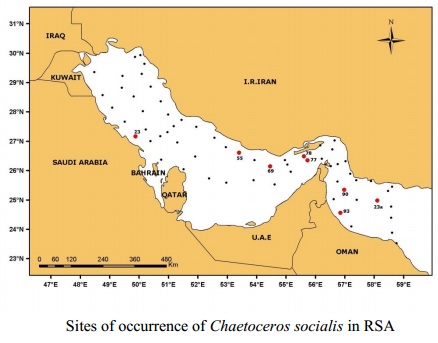