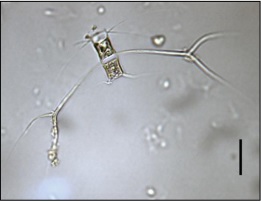 Description:
Chains straight, not twisted; elliptical valves; apical axis 9-33 µm in length. Cells rectangular with conspicuous corners by which adjacent cells touch each other. Apertures fairly wide, linear-six-sided to almost round. Valve mantle low, without distinct notch at junction with girdle band. Setae thin. Terminal setae strongly diverging, unlike, usually one directed backward from the chain. Some inner setae fused for about two-thirds their length, so that basal part is only a single seta which forks at its second third. These forked horns are thicker than the others and with spirals of conspicuous small spines; sometimes with long hairlike extensions. One chromatophore, placed near girdle (Cupp, 1943).

Sites of occurrence in RSA:
In Winter 2006 Cruise, this species occurred at various sites (refer sites map), usually in small numbers; however, it was quite abundant at some localities; maximum abundance (1.8*10^4 cells/l) was associated with the Sea of Oman (St. 25a). It has been previously reported from the inner RSA (Simonsen, 1974). 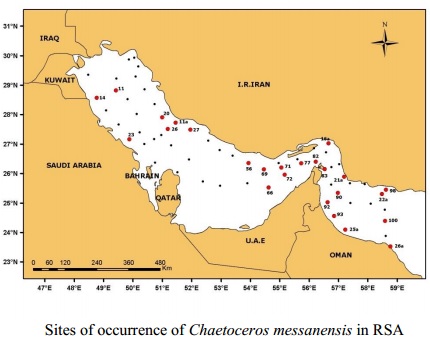