Description:
Chains straight, not twisted, usually short; cells with elliptical valve surface and apical axis, usually 8-12 µm long; valves flat or slightly raised in the center, with high valve mantle, with small, but distinct notch at junction with girdle; girdle-band zone small in resting cells; setae arising from the corners of the cell, without basal part. Apertures very narrow, slitlike; setae within chains of two kinds: (1) thin setae more or less curved, often straight, and usually slightly turned toward the chain ends; and (2) heavy setae, almost club-shaped increasing in thickness from the base out, then becoming thinner again near the ends. The first two-thirds of setae is almost straight and at a sharp angle from the chain axis, then turning gradually and at obtuse angle toward one or the other end of the chain, and running almost parallel to the chain axis in the outer part. The thicker setae are clearly angular and beset on the corners with
fine, spirally arranged little teeth. Terminal setae are always thin and differ from others in position - at first more or less U-shaped, in outer part nearly parallel to chain axis. Number of pairs of heavy setae in a chain, various and seem to conform to no rule. Chromatophores one in each cell, on girdle side. Resting spores unknown (Cupp, 1943).

Sites of occurrence in RSA:
In Winter 2006 Cruise, this species occurred at few sites in inner RSA (refer sites map),usually in small numbers; however, it was quite abundant at some localities; maximum abundance (1.5*10^3 cells/l) was associated with the northwestern part of the inner RSA (St. 7a). It has been previously reported from the inner RSA (Simonsen, 1974) and from Kuwaiti waters (Al-Yamani et al., 2004; Al-Kandari et al., 2009). 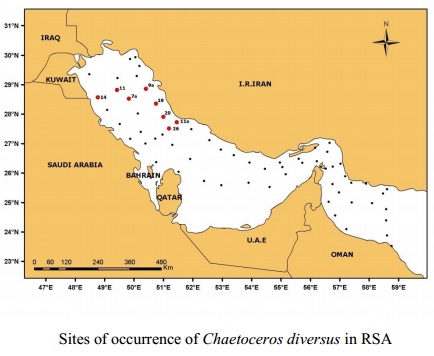