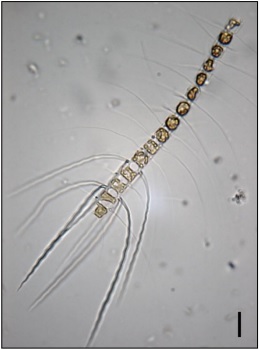 Description:
Cells 7-24 µm wide, four-cornered in broad girdle view, with rounded corners not touching those of adjacent cells; valves slightly convex, or flat. Chains straight, with cells more or less twisted about the axis of the chain. Apertures four- or six-sided, slightly curved in the middle, more or less wide, sometimes only a slit. Setae arising within the margin of the valve, basal part always distinct, outer part perpendicular to chain axis, and then bent. Setae delicate except for some pairs often differentiated, usually near center of chain; these setae are shorter than the others, thickened, twisted and directed toward one end of chain, almost parallel to chain axis. Chromatophores are small, 4-20 in each cell; resting spores in the middle of mother cell or at one end, with a thick girdle band fused to it, smooth, without row of small spines on upper margin in primary valve as recorded by Gran (Cupp, 1 943).

Sites of occurrence in RSA:
In Winter 2006 Cruise, this species was commonly observed at many sites (refer sites map),often in very large numbers. It was recorded as bloom-forming at some localities; blooms with cell concentration of more than 10^6 cells/l were associated with the Strait of Hormuz area (Stations 78 and 79). It has been previously reported from the inner RSA (Simonsen, 1974) and from Kuwaiti waters (Al-Kandari et al., 2009).