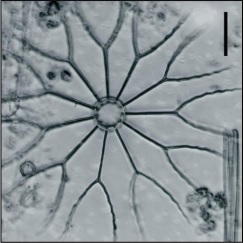 Cells cylindrical in cross section, circular. Bound into loose chains by the fusion of more or less numerous setae that are regularly arranged around the margin of the cells. Setae of two adjacent cells are fused for a certain distance beyond the base, farther out divided again.

Terminal setae different from others, often curved are not fused, and therefore, not bifurcating. Intercalary bands, absent as a rule. Apertures, between cells of varying widths. Cell wall delicate and hyaline, without clearly visible structure. Chromatophores are numerous, small, roundish, more or less lobed. Resting spores near middle of cell with small spines on one valve. All species are marine, pelagic (Cupp, 1943).

In Winter 2006 Cruise, the genus Bacteriastrum is morphologically close to Chaetoceros, which is the small-sized chain-forming diatoms. Three species of this genus (B. delicatulum, B. furcatum and B. hyalinum) were encountered and were important contributors to the total abundance of centric diatoms and phytoplankton as a whole at several stations, comprising up to 86% of the total phytoplankton abundance; the highest concentration reached 7.9*10^5 cells/l. High abundance of Bacteriastrum spp. (> 105 cells/l) was recorded off the Iranian
coast in the Sea of Oman and in the Strait of Hormuz.

Description:
Cells cylindrical, 6-15 µm in diameter. Chains long, straight. Setae 6-12, with strong, long basal part. Apertures usually relatively large. The bifurcation plane of inner setae lies in the valvar plane, transverse to chain axis. Forked parts are slightly curved, smooth or somewhat wavy. Terminal setae of both ends are directed toward the inside of the chain, and in front view of the valve, similarly curved. Stronger than inner setae and with fine spines, arranged spirally. Chromatophores are small, numerous and distributed along cell wall (Cupp, 1943).

Sites of occurrence in RSA:
In Winter 2006 Cruise, this species was frequently observed at various sites (refer sites map),sometimes in very large numbers; maximum abundance (1.8*10^5 cells/l) was associated with the Iranian coast in the Sea of Oman (St. 88). It has been previously reported from Kuwaiti waters of the inner RSA (Al-Yamani et al., 2004; Al-Kandari et al., 2009). 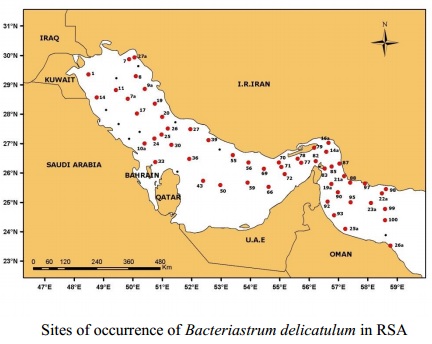