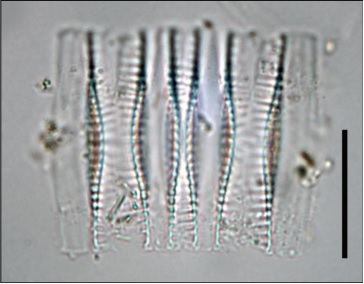 Taxonomic Remarks:
This species was rare and has been examined only in girdle view; valve structure was not determined. Cells were similar in morphology and size to C. lorenziana in girdle view.

Sites of occurrence in RSA:
In Winter 2006 Cruise, this species occurred at few sites (refer sites map), usually in small numbers; maximum abundance (3.5*10^3 cells/l) was associated with the northwestern part of the inner RSA off Saudi Arabia (St. 15). It has been previously reported from Kuwaiti shore (Hendey, 1970).