Cells usually drum- or disk-shaped, united in flexible chains by a cytoplasmic or gelatinous thread, or living in formless gelatinous masses, or seldom solitary. One or more intercalary bands to each valve. Valves with areolae or delicate radial rows of punctations. Structure isoften difficult to see. Marginal spinulae or little spines are present, usually distinct, sometimes with mucilage threads extruding which may be much longer than the cell itself. 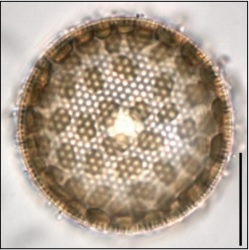 Valves rounded or flat, in a few species depressed in the center. Chromatophores are numerous, small, and platelike. Auxospores are formed as large bladders by separation of the valves and formation of larger cells in these. Resting spores known in several species, resembling biconvex lenses, formed in regular cells. A true planktonic genus. Mucilaginous threads help adapt it for floating (Cupp, 1943).

Description:
Girdle view: valve face flat, mantle low and rounded. Connecting thread between cells in chains relatively long, up to about twice the length of cell diameter. Valve view: areolae in curved tangential rows (eccentricus structure) with tendency to fasciolation in larger cells. Central strutted process is close to a larger areola surrounded by seven areolae. Strutted processes are scattered over the valve face and in two marginal rings. One ring of coarse spines at some distance from the margin (Throndsen et al., 2007).

Sites of occurrence in RSA:
In Winter 2006 Cruise, this species was observed at various sites (refer sites map), usually in small numbers; however, it was quite abundant at some localities; maximum abundance 60 (5 10 3 cells/l) was associated with the northwestern part of the inner RSA off Saudi Arabia (St. 23). It has been previously reported from the inner RSA (Simonsen, 1974) and Kuwaiti waters (Al-Kandari et al., 2009). 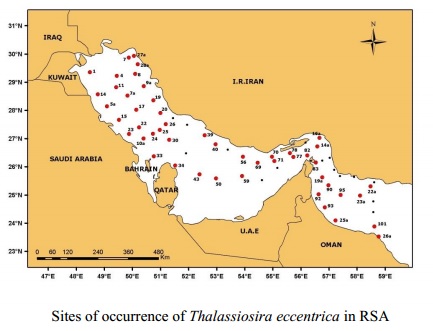