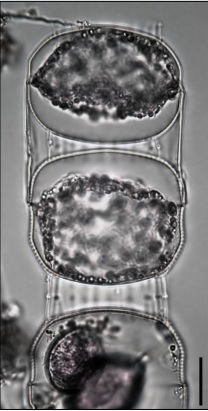 Description:
Cells oblong, with the slight narrowing of the cylindrical part of the valve against the margin, and by the hexagonal areolations which are slightly smaller near the girdle line than on the rest of the valve.Areolae 1½-2½ in 10 µm at center of valve; 3½-4 on
upper part of mantle; and 5-5½ near girdle line. On the newly formed valves, 2-2½ areolae in 10 µm on mantle. Diameter of cells 27-71 µm. Cells united in chains by 10-22 hollow spines arranged in a circle at each end of cell. Chromatophores numerous, platelike. Nucleus central. Twin resting spores large, like vegetative cells but thicker-walled; primary valve with uniting spines more radiating than in vegetative cells; secondary valves with acute, diverging spines without connection with another valve (Cupp, 1943).

Sites of occurrence in RSA:
In Winter 2006 Cruise, this species was frequently observed at various sites (refer sites map),usually in small numbers; however, it was quite abundant at some localities; maximumabundance (1.1 103cells/l) was associated with the Sea of Oman (St. 88). It has been previously reported from the inner RSA (Simonsen, 1974) and from Kuwaiti waters (AlKandari et al., 2009). 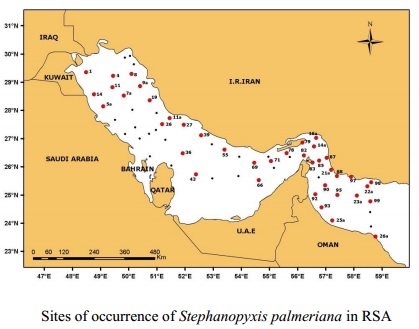