Description:
Cells lens-shaped, elliptical, or cylindrical with rounded ends. Chains are long, thin, usually straight. Cells are held in chains only by means of spines. Spaces between cells are usually or often longer than cells themselves. Chromatophores two. Nucleus central. Diameter of cells 3-20 µm. Auxospores not uncommon. In chains, 6 µm in diameter, auxospores are 17-20 µm in diameter (Cupp, 1943).

Harmful Effect:
Non-toxic bloom-forming species. It is not considered harmful, but dense blooms may lead to loss of appetite and change in behavior among farmed fish. Blooms of this species produce basically harmless water discolorations, with the result that the recreational value of the bloom area decreases due to low visibility of the water and eventually, under exceptionally weather conditions in sheltered bays, the blooms can grow so dense that they cause escape reactions and indiscriminate fish kills and kills of benthic invertebrates due to oxygen depletion (Andersen, 1996).

Taxonomic Remarks:
Prior to the year 2005, seven Skeletonema had been described, of which Skeletonema costatum was regarded as cosmopolitan and was one of, or perhaps the most frequently recorded planktonic diatom globally. Examination of type material of Skeletonema costatum from Hong Kong Bay by EM, and further genetic and fine structural studies of a huge material from all oceans showed, however, that what had been recorded as Skeletonema costatum, could well be any of the six new Skeletonema species described after the turn of the century (Throndsen et al., 2007).

Sites of occurrence in RSA:
In Winter 2006 Cruise, Skeletonema cf. costatum was observed occasionally in the samples of scattered stations (refer sites map), often in high concentrations. Its maximum contribution to the total phytoplankton abundance reached 57 %; the highest concentration was 7.9 105 cells/l. Distribution of this species was localized. High abundance of Skeletonema cf.costatum (> 10
5 cells/l) was recorded in the waters off the Iranian coast in the central part of the inner RSA. It has been previously reported from the Indian Ocean (Simonsen, 1974) and from Kuwaiti waters (Al-Kandari et al., 2009). 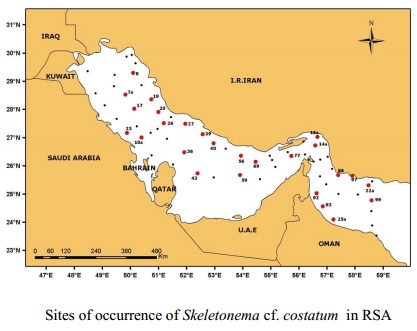