Cells single; disk-shaped, with a hyaline winglike expansion all around consisting of extracellular chambers strengthened by radial rays. The winglike expansion is weakly siliceous, an organ of flotation. Areolae hexagonal, arranged in slightly curved, nearly parallel rows, based on arrangement of seven divisions. Central areola with seven areolae grouped around it. Chromatophores are numerous small plates which lie along the valve surface (Cupp, 1943). 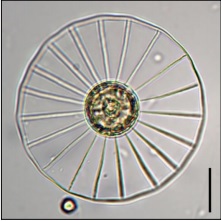 Description:
Valves nearly flat; cells disk-shaped. Areolae hexagonal, arranged in slightly curved, nearly parallel rows, based on arrangement of seven divisions. Central areola with seven areolae grouped around it. Areolae 5-7 in 10 µm in center of valve; 7-8 midway to margin; and 8-9 near margin. Central disk varies in diameter from 21 to 81 µm; entire cell from 50 to 165 µm.
Only one valve of the cell is provided with the wings, so upon division one daughter cell has none. Few wingless cells have been observed, however, perhaps because they sink rapidly, because they are not distinguishable from Coscinodiscus xcentricus, or because new wings are produced rapidly (Cupp, 1943).

Distribution:
Oceanic species; probably living near the bottom. Widely distributed but most common in subtropical or tropical seas (Cupp, 1943).

Sites of occurrence in RSA:
In Winter 2006 Cruise, this species was observed at various sites (refer sites map), usually in small numbers; however, it was quite abundant at some localities; maximum abundance (103cells/l) was associated with the Sea of Oman (St. 25a, 26a). It has been previously reported from the inner RSA (Simonsen, 1974) and Kuwaiti waters (Al-Kandari et al., 2009). 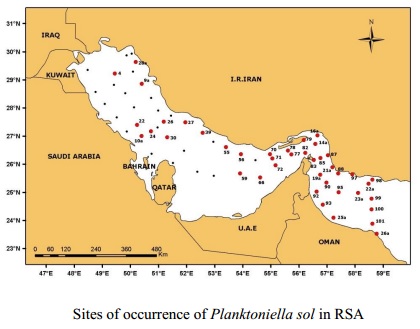