In Winter 2006 Cruise, the genus Leptocylindrus included three species, of which Leptocylindrus danicus was the most bundant. The genus contains small-sized chainforming diatom algae. When abundant, it contributed up to 50 % of the total hytoplankton abundance; the highest concentration reached up to 9.2*10^4 cells/l. High abundance ofLeptocylindrus spp. (>104cells/l) was recorded in the northwestern part of the inner RSA, inthe southern part of the inner RSA near the Strait of Hormuz (off the Iranian coast) and in the Sea of Oman.

Sites of occurrence in RSA:
In Winter 2006 Cruise, this species was commonly observed at various sites (refer sites map),often in large numbers; maximum abundance (9.2*10^4cells/l) was associated with the north-western part of the inner RSA (St. 9a). Species has been previously reported from Kuwaiti waters of the inner RSA (Al-Yamani et al., 2004; Al-Kandari et al., 2009). 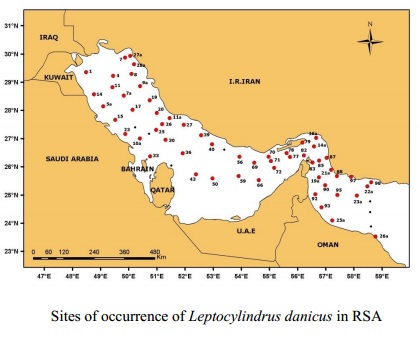