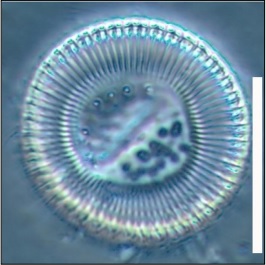 Description:
The surface structure of the valve is very complex. The outer striated zone is slightly elevated at the margin, and is depressed as it meets the central portion.This central portion is raised to the same level as the outer zone, and its surface has an irregularly corrugated appearance (not distinctly punctate) and is crossed by an undulation which does not extend into the striate outer zone. Diameter 24-32 µm, but cells may be larger (Hendey, 1970).

Distribution:
It is littoral benthic species, mainly distributed in warm waters; allochthonous in the plankton.

Sites of occurrence in RSA:
In Winter 2006 Cruise, this species was observed in the north-western part of the inner RSA (refer sites map). It has been previously reported from the inner RSA (Simonsen, 1974) and from Kuwaiti shore (Hendey, 1970) and coastal waters (Al-Kandari et al., 2009).