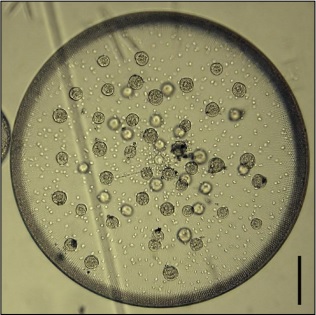 Harmful Effect:
Non-toxic bloom-forming species. In the late 1970 the fishermen in the Plymouth area complained that their nets became logged with a heavy jelly-like material. Mucilage produced in cultures of Coscinodiscus wailesii, is an important constituent of the phytoplankton in these waters from 1977, and mucilage from the nets were shown to have basically the same chemical structure (Boalch, 1984).

Sites of occurrence in RSA:
In Winter 2006 Cruise, this species occurred at various stations in very small numbers (refer sites map). It has been previously reported from the inner RSA (Kuwaiti waters) (Al-Kandari et al., 2009).