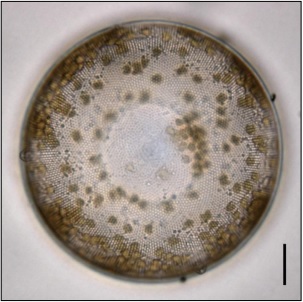 Description:
Cells double convex, solitary, free. Valves circular, flat or slightly concave in the middle,sometimes a little higher on one side than on the other. Valve surface covered with a fine subhexagonal areolation, radiating from a more or less distinct rosette of large areolae in the center. Central areolae often elongated or sub-elliptical. Areolae 5-6 in 10 µm near the center, 8-9 in 10 µm about half of radius and 13-15 in 10 µm near the margin. Areolae loculate with a cover pore in the inner membrane and a finely poroid sieve membrane. Near the margin the areolae are arranged in obliquely decussating rows of curved lines. At about half of radius, there is often an irregular ring of interstitial spinulae. Inside the margin is a distinct row of spinulae, about 8-10 µm apart, from which narrow hyaline darts run towards the center. The darts are made prominent by a row of slightly larger areolae bordering them upon either side. Two large conical apiculi are situated near the margin, separated by an angle of approximately 110-120º. Diameter of valve 140-250 µm (Hendey, 1964).

Sites of occurrence in RSA:
In Winter 2006 Cruise, a single specimen was found in each of the samples from the Strait of Hormuz and the Sea of Oman (refer sites map). Species has been previously reported from Kuwaiti waters of the inner RSA (Al-Kandari et al., 2009). 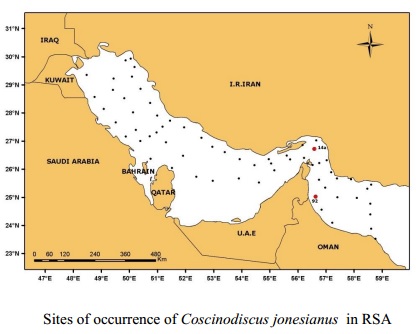