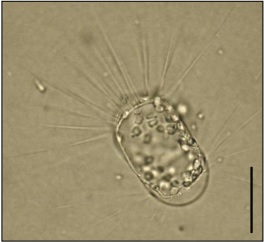 Description:
Cells with cylindrical mantle and arched hemispherical valves. Diameter 12–38 µm. In individuals with auxospores, old cells varied from 13 to 24 µm in diameter, auxospores, from 33 to 38 µm. Circle of long slender setae at edge of valve. After cell division, while setae are enclosed within the girdle zone, they are parallel to the pervalvar axis. When free,on one valve, all radiate out in same direction from center of cell; on other valve, two types of setae are formed, longer ones of uniform width and approximately parallel to those of the firstvalve, and shorter ones ending in an irregularly twisted knob. These shorter ones radiate forward. Intercalary bands, not usually visible in water, collarlike. Chromatophores numerousround or slightly elongated plates (Cupp, 1943).

Sites of occurrence in RSA:
In Winter 2006 Cruise, this species was observed at various sites (refer sites map), often in large numbers; maximum abundance (6.1*10^3 cells/l) was associated with the northwestern part of the inner RSA (St. 19). 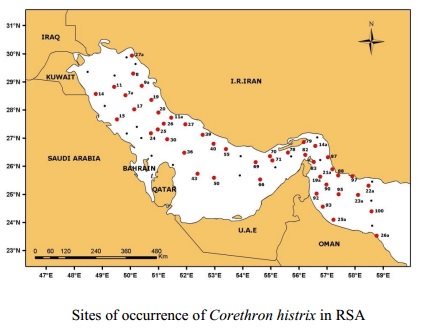