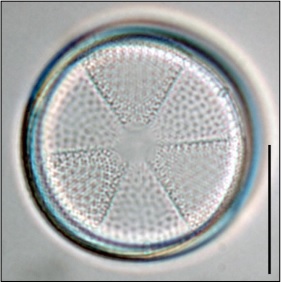 Cells disk-shaped, single. Valves divided into sectors which are alternately raised and depressed. Smooth central area. No intercalary bands. Cell wall usually of several layers, the individual membranes punctated (the puncta in crossing lines) and more or less strongly areolated. The areolation is strongest on the outer layer, on the inner membrane, often entirely lacking. On outer margin of the sectors, often only on the raised ones, seldom displaced toward the cell center, one or more claw-like processes that communicate with the inner cell by a pore canal. Valve margin more or less wide and often with numerous marginal spinulae (Cupp, 1943).

Description:
Valve divided into sectors, usually six, that are alternating elevated and depressed. Hexagonal non-areolated area in valve center. One labiate process with outer tube at each of the elevated sectors. Strong and irregular areolation. Diameter 20-150 µm; 4-7 areolae in 10 µm (Throndsen et al., 2007).

Sites of occurrence in RSA:
In Winter 2006 Cruise, a single specimen was observed at one locality in the Sea of Oman (St. 92) (refer site map). It has been previously reported from the inner RSA (Simonsen, 1974) and from Kuwaiti shore (Hendey, 1970). 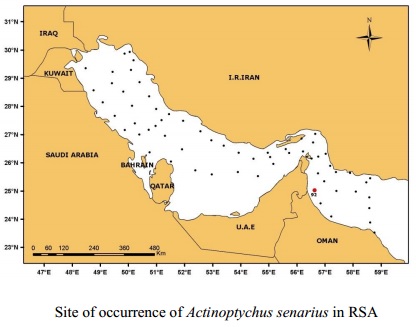