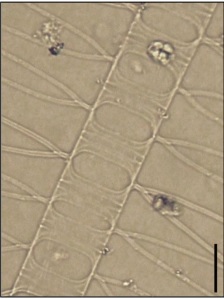 Description:
Cells 9-84 µm wide, four-cornered in broad girdle view, with sharp corners touching those of adjacent cell. Chains straight, stiff, more or less flattened, usually many-celled. Apertures varying in size and shape according to season of year: in winter small, linear to lanceolate; in summer and autumn, larger, elliptical or circular. Setae without a basal portion, arising at corners of valves perpendicular to chain axis, fusing together in pairs for some distance, the fused portion two or three times as long as diameter of setae; terminal setae shorter and thicker than others, first directed obliquely outward, then bent, so that outer half is nearly parallel to chain axis.
Setae are without special sculpturing or with very fine spines and puncta; sometimes with dots near the extremities. Occasionally so, heavily punctuated, they resemble those of C. lorenzianus. Chromatophores are 4-10 per cell. No resting spores known (Cupp, 1943).

Sites of occurrence in RSA:
In Winter 2006 Cruise, this species occurred at few sites (refer sites map), usually in small numbers; however, it was quite abundant at some localities; maximum abundance (1.5*10^3 cells/l) was associated with the central part of the inner RSA (St. 26). It has been previously reported from the Indian Ocean (Simonsen, 1974) and from Kuwaiti waters of the inner RSA (Al-Yamani et al., 2004; Al-Kandari et al., 2009). 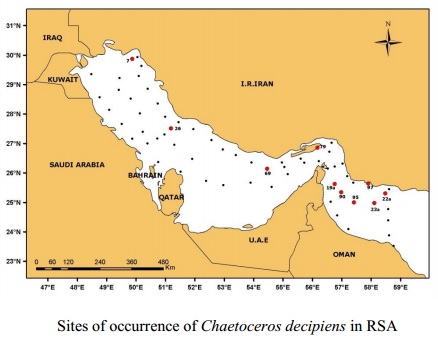