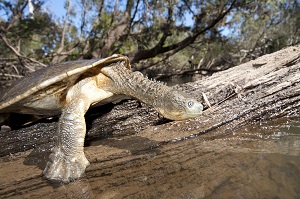 Urgent action is required to prevent an endangered turtle that breathes through its bottom from being wiped out, a researcher of the species has warned.
The white-throated snapping turtle was recently listed as critically endangered by the federal government amid fears that loss of eggs and hatchlings is crippling the population.
The turtle is perhaps most notable for its ability to breathe via its anus. The process, known as cloacal respiration (or more colloquially as "bum breathing"), allows the turtles to extract oxygen directly from the water.
This unique anal ability allows the turtles, which weigh around 5kg, to dive for up to three hours in search of aquatic plants, which is their main food source along with the odd insect.
The turtles lay one batch of around 13 eggs a year in nests near their preferred habitat of clean, free-flowing water.
However, a James Cook University researcher has warned that the species is losing almost all of its eggs and hatchlings in one of its last strongholds in Queensland, around the Fitzroy, Mary and Burnett river catchments.
Jason Schaffer said the turtles have suffered from a restriction in water movement due to the construction of dams, as well as from sediment and erosion caused by agriculture and mining. Turtle nests have also been ravaged by feral animals, many of them introduced species.
"Juvenile turtles have a higher mortality in the river, coupled with a higher reliance on aquatic respiration, and so are more vulnerable to the degradation of water quality," Schaffer said. "They are simply not surviving."
The remaining populations of turtles are now made up of ageing adults. The snapping turtle can live for up to 100 years.
"They can't get over the weirs in either direction," Schaffer said. "The major risk for the remaining adult turtles is going over the top of a weir. Their shells crack or shatter on impact and they die."
Schaffer said the habitat of bum-breathing turtles should be better protected, with land regeneration preventing further erosion.
"They have been declared critically endangered, and if the increased water infrastructure development and drought in northern Australia continues they will continue to get hammered," he warned.